Serotonin syndrome is a rare life-threatening condition which needs to be identified early and treated aggressively in the emergency room. It results from an ingestion of a serotonergic medication that leads to dysregulation in the neurotransmitter serotonin. This results in abnormalities in the central nervous, autonomic, and neuromuscular systems. Clinically this presents as hyperthermia, tachycardia, agitation, hallucination, hyperreflexia, and altered level of consciousness. There are no good blood markers for the syndrome and clinical tools such as the Hunter Serotonin Toxicity Criteria are required. This is a case report of an intentional overdose on a cough syrup containing dextromethorphan that resulted in serotonin syndrome diagnosed and treated in the emergency department.

Serotonin syndrome is a condition that results from a dysregulated increase in the neurotransmitter serotonin [1,2]. It is acute in onset and is precipitated by the ingestion of medications that increase serotonin (specific antidepressants, antiepileptics or antiemetics for example) or inhibit metabolism of serotonergic medications [1,2]. Serotonin syndrome is a rare life-threatening condition which needs to be identified early and treated aggressively in the emergency room. This is complicated by the fact that serotonin syndrome presents similarly to other sympathomimetic toxidromes. The following case highlights the nuances in diagnosing serotonin syndrome in an attempted overdose presenting to the emergency room. It demonstrates the importance of assessing tone when performing a full neurological exam in an altered and agitated patient. The case also demonstrates the importance of keeping a wide differential in multidrug overdoses especially when they are associated with dextromethorphan (antitussive) and escitalopram (antidepressant).

A.B is 27F that presented to the emergency room at 09:30am after a witnessed seizure by her friend at 09:00am. She was last seen at 01:00am. Her friend went to check on her in the morning and shortly after, noted the patient was seizing. This had resolved without any intervention or therapy by the time the ambulance arrived. The patient admitted feeling depressed and ingesting 26 tablets of escitalopram 20mg escitalopram. She also admitted consuming an unspecified amount of alcohol and cannabis. The patient later admitted also drinking an unspecified amount of a cough and cold medicine that contains acetaminophen, dextromethorphan, and phenylephrine.

Upon presentation she was found to be in an altered level of consciousness, diaphoretic and tremulous with a tachycardia of 140. Her ECG was in sinus with an incomplete right bundle branch bock and showed a QTc of 564 and a QRS of 118. She was afebrile at 36.0oC. She was tachypneic at a respiratory rate of 30. The rest of her vitals were normal. Her initial GCS was 11 (Eyes 3, Verbal 2, Motor 6). She was not actively seizing, and she was protecting her airway.

Her blood work for toxins was negative. Specifically, her acetaminophen, salicylate and ethyl alcohol levels were normal.

She was initially treated with benzodiazepines for suspected alcohol withdrawal. She required repeated dosing. In total she received 4mg of lorazepam and 30mg of diazepam. However, she remained tachycardic and diaphoretic.

During the first 6 hours of her 12 hour stay in the emergency department she became progressively more agitated and started to have visual hallucinations. Her creatine kinase level returned elevated at 342U/L. She also spiked a fever at 38oC. A more detailed neurological exam at revealed inducible clonus to her feet and hyper-reflexia of 3+ to her brachial and patellar reflexes. After consultation with the toxicologist and based on the Hunter serotonin syndrome criteria she was diagnosed with serotonin syndrome 10 hours after initially presenting. Cyproheptadine (antiseritonergic antidote) was started at 12mg with a repeat dose of 4-8mg every 4-6 hours. She was then consulted to the intensivist and admitted to the intensive care unit. Once she was stabilized she was transferred to a regular medical floor. The patient was also placed on a psychiatric hold and a psychiatrist became involved with her care once she was medically stable. She was hospitalized for a total of 5 days.

The incidence of serotonin syndrome is not clearly defined likely due to under-reporting of cases. Serotonin syndrome is a clinical diagnosis associated with the use of serotonergic medications. It results in the dysregulation of the central nervous, autonomic, and neuromuscular systems [2]. Patients often present either agitated or in an altered level of consciousness. They will exhibit signs of tachycardia, hypertension, mydriasis, diaphoresis, or hyperthermia. Increased neuromuscular activity will present as a hyperreflexia, clonus, tremors, or akathisia. Ocular clonus, or involuntary rotatory movements of the eyes, is a particularly pronounced presentation of increased neuromuscular activity.

A typical ER toxicologic work up would include electrolytes, a complete blood count, osmolality, a serum toxicologic screen (for ethyl alcohol, acetaminophen, and salicylates) and a urine drug screen (for opiates, barbiturates, tricyclics, methamphetamines, cocaine, THC and benzodiazepines). These are typically available within 1 hour. Further toxicologic testing for volatile alcohols or specific toxins is not practical in the emergency department and would require bloodwork to be sent out to a toxicology lab. There are however no reliable laboratory findings that will provide a clear diagnosis of serotonin syndrome.  Therefore, a clinical tool such as the Hunter Toxicity Criteria is important to keep in mind (Figure 1). The current form has a sensitivity of 84% and a specificity of 97% for serotonin syndrome [3].

Treatment is initially supportive and includes usual toxicologic care [3]. This involves decontaminating if it is safe and stopping offending agents [4]. Usual airway management is practiced, and seizures are treated with benzodiazepines initially. Benzodiazepines are also used to treat agitation and will support in normalizing abnormalities to the vital signs (hypertension and tachycardia) caused by the agitated state. Short acting agents like esmolol can also be used for resistant and severe tachycardia or hypertension [5,6].  Hyperthermia is a physical finding because of increased muscular activity and antipyretics do not work [6]. Finally, anti-serotonergic agents like cyproheptadine can be used as a serotonin receptor antagonist [6,7].

In the case above, the patient was initially treated for suspected alcohol withdrawal given a history of alcohol consumption along with presentation of tachycardia, tremors, diaphoresis, and agitation. However, she did not improve as expected over a 10 hour observation. Instead, she developed hyperthermia and became more agitated. After a reassessment of her neurological exam revealed induced clonus and hyper-reflexia a diagnosis of serotonin syndrome was considered. This was then confirmed with a toxicologist and she was admitted for a short stay after treatment with benzodiazepines and cyproheptadine. She recovered fully. 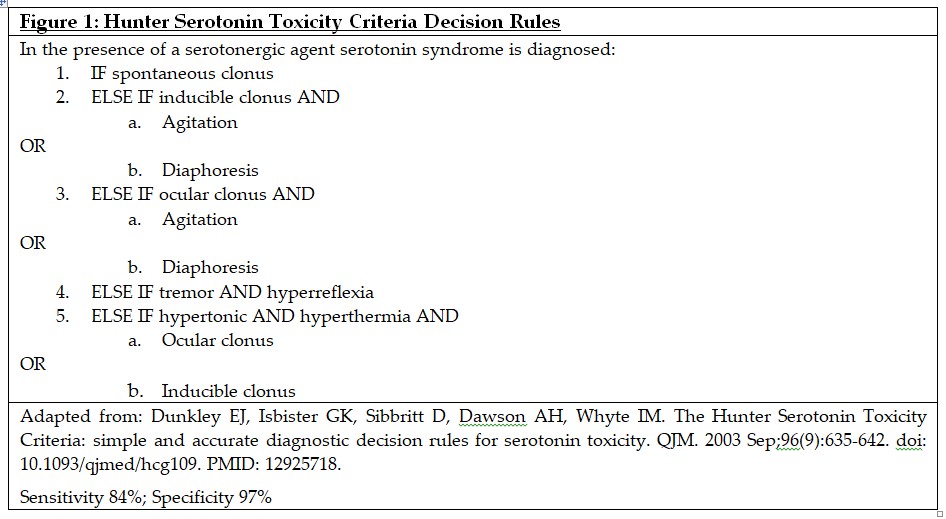